The results of the Scottish Independence referendum are in: 55% No, 45% Yes.

Not the result I was hoping for. Â As an adherent to Eugene Debs’ dictum of “I’d rather vote for what I want and not get it, than vote for what I don’t want and get that”, I’m used to failure. Â But this loss has been hard to take, for a couple of reasons. First, I went from thinking that there was no way we could win to thinking we just might. And all the people I spoke to, all the arguments I read, and the energy and creativity of the campaign made me realise we could do something really good.

On the eve of the vote I broke from my usual tradition of watching the pundits babbling on tv because I knew that the first count wasn’t due til about 1am and the result wouldn’t be announced until 6.30am. Â And I had work the next day and I didn’t want to deal with tiredness and defeat.

For some reason that night I had a sudden feeling we weren’t going to win and so I wasn’t surprised when I woke to hear we’d lost. I was glad I hadn’t stayed up because if I’d watched in real time, I would have watched us losing every vote, until at 4.57am we won Glasgow and evened the score, until at 4.59amÂ the return for Scottish Borders came in.

It was upsetting and demoralising and that was a tough day of work to get through, but I did it. It helped to know that there were so many other people who felt the same way about it. Weeks before, I had spoken to two people at my work who were going to vote No, but everyone else I spoke to was for Yes, and I was surprised that some of them were. Â And that so many of them wanted to talk politics. Usually I’m the only one who wants to talk about this kind of politics, a politics of ideas and aspirations that is informed by the world as it is and the understanding that it not only doesn’t have to be this way, it shouldn’t.

And that was the thing that made it so wonderful to be a part of. Since the 1980s people have gradually and increasingly become more and more detached from one another and ultimately from themselves. Â But now so many people in one place felt a reason to not only discuss politics but to actually speak freely to one another. The neoliberal wall of silence had been breached.

Unfortunately half of the population weren’t having this conversation with us. While two No voters had no problem giving me their views, they both knew me and they knew I wouldn’t be an asshole about it. Â But for those who didn’t know me, the Yes badges maybe made them think “I don’t want to have this conversation with you”. Â There’s nothing worse than getting lectured at by people who feel evangelical when you don’t feel that way. The tragedy is that we could not connect with people who would have agreed with us on a lot Â of the same things – ending austerity, getting rid of Trident and creating a world fit for humans and not just multinational corporate profits.

Of course there are some people who don’t want that and that’s the same the world over. Â Some of them benefit from oppressive systems, and some of them are blinded by them but the point is they just don’t agree and they may never. Â But I think a substantial proportion of the 55% agree with the aims of the 45%. Even among those who want to maintain the union, most don’t want to maintain the system and have the same lack of respect for Westminster politics as the rest of us. It follows for some people that independence is therefore divisive; after all, so many people in the UK agree we need a new type of politics so why separate?

But divisiveness isn’t limited to independence and is an inevitable part of politics. For days leading up to the vote, George Square, the main square in front of Glasgow City Chambers, was the scene of a joyous carnival. The night before a crowd variously estimated at between 2,000 – 18,000 people gathered to hear speeches and sing songs by a large banner for peace and against nuclear weapons. There had been a small, angry contingent of people with No Thanks signs and Union Jacks, but they were separated from the main crowd by the police, who kept them across the street. 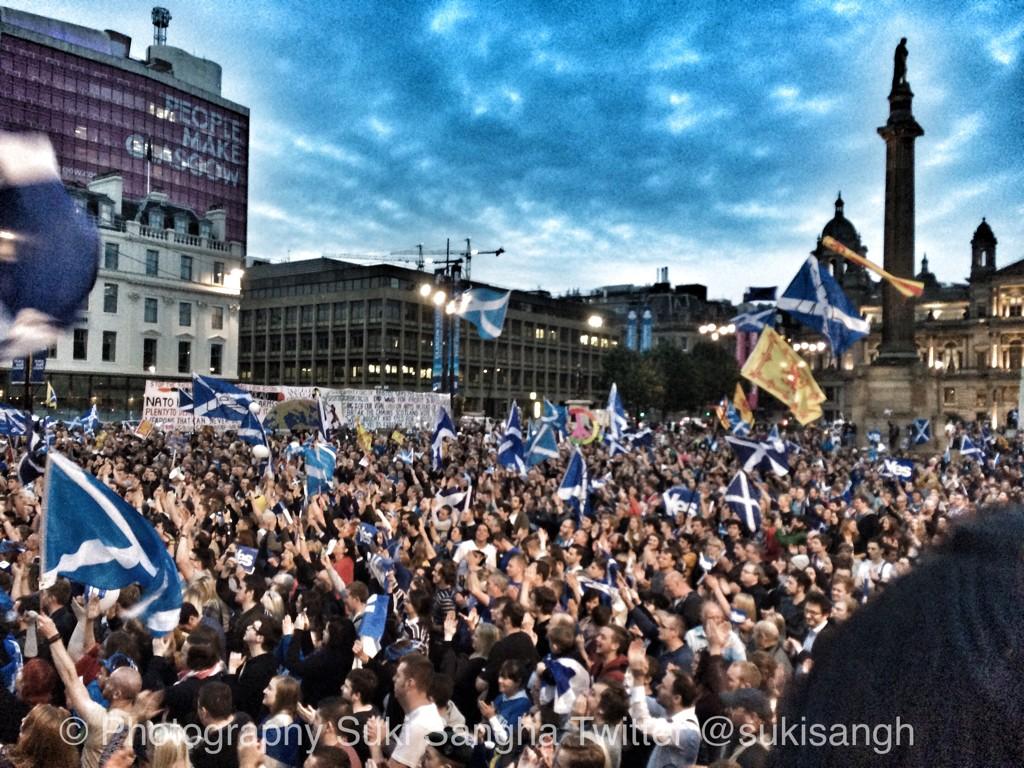 After the vote, Yes supporters went back to George Square to commiserate. They were met by a much larger contingent of Union supporters, many of whom had been organised by the far-right racist Scottish Defence League and the Vanguard Bears (a Rangers supporting hooligan group). Â The police were able to separate the groups, but nonetheless supporters of the Union rampaged through the surrounding streets, harassing people, including a SNP councillor who is openly gay and beating up people with Yes badges. After the vote and the resignation of Alex Salmond, this seemed like the final insult.

It was depressing and demoralising. We could have followed the path of many of those who protested against the Iraq War, folding up our tents, going home and retreating from politics. But people kept talking to one another and reminding ourselves that a campaign that two years ago had started out at 25% in the polls had won almost half the vote. And we were still committed to ridding Scotland of Trident and food banks, and ending child poverty in a wealthy nation (1 in 5 children live in poverty in Scotland).

For those of us who voted for Yes, we have seen something happening that we want to keep happening. And after the understandable despair, people are moving forward. All the parties which supported Yes are seeing floods of new members. The SNP has seen its membership increase by 18,000 since the vote, making it the largest party in Scotland at over 40,000 (and the 3rdÂ largest party in the UK, with more members than the Lib-Dems and the right-wing UKIP party). The entire membership of Scottish Labour is estimated at between 5,000 – 13,000. And the Scottish Greens and the Scottish Socialist PartyÂ have seen significant membership gains, with about 3,000 and 1,500 respectively.

And meanwhile, it turns out that the pledge to more devolution, made by the main Westminster party leaders with such fanfare, is in danger of falling apart. Â David Cameron has stated that there also needs to be devolution for England and Ed Miliband has said he won’t support Cameron (as it would mean his 41 Scottish Labour MPs not voting on English matters, making it impossible for a potential Labour government to function). Â Many of those who voted No did so because they were sold an economic argument that there was “strength, stability and security” in the Union. However, it turns out that 50,000 public sector jobs – 1 in 10 – are due to be cutÂ in Scotland. And if Labour gets in, they plan on raising the retirement age and cutting the winter fuel allowance for the elderlyÂ and child benefit.

This site uses Akismet to reduce spam. Learn how your comment data is processed.